NZABA’s 11th annual conference was hosted by the Department of Psychology, University of Otago, Dunedin, on the 29th to 31st August, 2014. Despite the travel involved for many attendees, 88 people attended, equalling the number at NZABA in Auckland last year (our highest attendance to date). This included a mix of students, academics, practitioners, and professionals from across New Zealand and Australia.  There were 31 paper presentations and 8 poster presentations at this year’s conference, and the standard of talks and posters was extremely high.  NZABA again offered Continuing Education Units to practitioners in applied behaviour analysis, administered by Katrina Phillips.

The conference’s social activities began with a welcome event on Friday evening at Geoff White’s house.  On Saturday evening, there was a tour of the Speight’s Brewery, and a conference dinner at the Speight’s Ale House. These events were very well attended (with a record number of 84 people at the dinner), and allowed conference attendees to mingle with one another.

At the start of the conference, Geoff White received a special award in recognition of his outstanding contributions to behaviour analysis in New Zealand.

Two student presentation prizes were awarded this year. John Bai (The University of Auckland) received the EAB award for his talk entitled “Response rates and persistence after response-contingent food and additional stimuli”.  Mitchell Stevenson, Shaun Pearl , Vanessa Rausa, and Simon Finkelstein (Monash University) jointly received the ABA award for their talk entitled “Teaching job skills to adults with ASD: Efficacy of video modelling”. Congratulations to these students on their awards, and thank you to all student presenters for contributing to an excellent programme.

At the end of the conference, Brett Furlonger passed the (now lost) Hatchet/Bullroarer to Katheryn Neilson (Victoria University of Wellington) for teaching him about his own gambling behaviours. Katrina Phillips passed the Spear to Randy Grace (University of Canterbury) for the use of various “mentalisms” throughout his talk.

The University of Canterbury in Christchurch was confirmed as the venue for the 2015 conference, and Celia Lie handed over the Chair/President role to Randy Grace, Anne Macaskill stays on as Secretary, and the Treasurer role is currently in negotiation.

Thank you to everyone who helped organise NZABA 2014. Special thanks to Geoff White for hosting the welcome event at his house, and for making many, many pizzas to cater for the hungry crowd.

We look forward to seeing everyone at NZABA 2015 in Christchurch.

The complete conference programme is now available for download below. This includes general information about the conference, as well as complete titles, authors, and abstracts for all presentations. The programme will also be available in booklet form at the registration desk on Saturday at the conference. 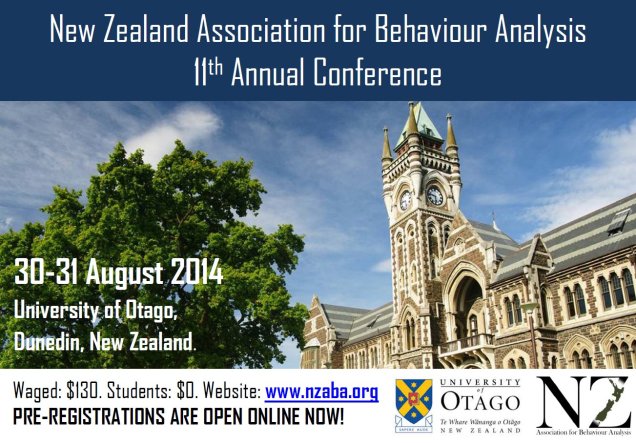 New for 2014, we have opened up Pre-registrations for the NZABA Conference. You also have the option of paying for your registration costs and social activities via internet banking prior to the conference.

[CLICK HERE TO VIEW MORE DETAILS ABOUT PRE-REGISTRATIONS AND COSTS] 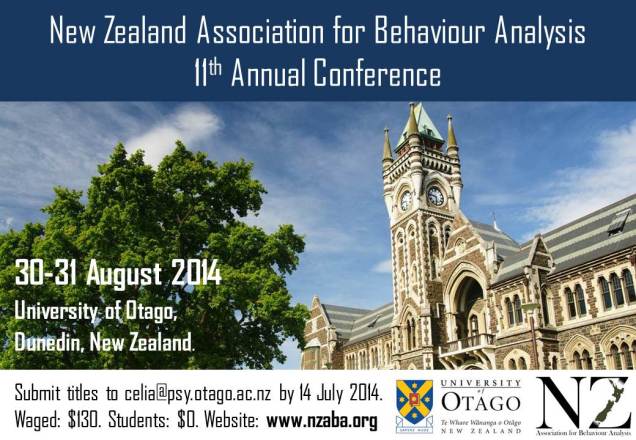 Here is the Call for Papers for the 2014 11th Annual New Zealand Association for Behaviour Analysis Conference, to be held on the weekend of August 30-31st at the University of Otago campus in Dunedin, New Zealand. There will be informal drinks on Friday 29th August, with papers and posters presented on Saturday 30th and Sunday 31st August.

Please note that the deadline for title submissions is the 14th July 2014 (abstracts are not due until the 11th August). Please submit these to Celia Lie at celia@psy.otago.ac.nz. For all enquiries, please email Celia Lie directly.

The conference is free for students and $130 for everyone else. Depending on the overall costs of this year’s NZABA conference, there may be limited funding available in 2014 for students who present a paper or poster to reimburse some travel costs. If you are unable to source alternative conference funding, please contact your supervisor who will apply to us on your behalf. Please note that funding will be made available after the conference to eligible students.

Please forward this Call for Papers to anyone else you think may be interested in attending.

Looking forward to seeing you all in Dunedin.

You can download the final programme for the 2012 NZABA Conferencer [HERE]. Printed out copies will also be available at the venue.

If you are arriving on Friday night, please join us from 6pm Milk and Honey on the Victoria University campus (we will be there until 8ish). If you arrive on Saturday, registration will begin at 8am at Hugh Mackenzie 002. There is a map in the attached programme with the conference locations indicated, and a complete campus map can also be found here: http://www.victoria.ac.nz/home/about/maps/publications/kelburn-campus-map.pdf

There is lots of construction underway at Victoria at the moment and so it can be a little bit tricky to navigate around campus. Look for the NZABA signs to direct you and if you have any problems finding any of the conference locations, you can call/text Maree (027 242 0208) or Lincoln (021 403 126).

A draft programme of the 2012 NZABA Conference can be downloaded from here: [CLICK HERE TO DOWNLOAD] (.pdf file)

If you are presenting, please check the draft programme and email Anne Macaskill (anne.macaskill@vuw.ac.nz) if you spot any errors or need any changes to be made.

A few other points from the organisers:

1. Abstracts are due on the 17th of August. Thank you very much to everyone who has sent in their abstract already.

2. If you do not plan to present, although you are always welcome to register on the day of the conference, it would be helpful to us if you could let us know that you plan to attend.

Please email Maree Hunt (maree.hunt@vuw.ac.nz) or Anne Macaskill (anne.macaskill@vuw.ac.nz) about any of the above.

An Affiliated Chapter of the Association for Behavior Analysis International (ABAI)

NZABA
Create a free website or blog at WordPress.com.